Racehorses are particularly prone to musculoskeletal overload and injury. New Zealand reported as much as 82% of musculoskeletal problems during training and racing season (Perkins, 1999). Muscle injuries are only diagnosed when there is lameness or a decline in performance. 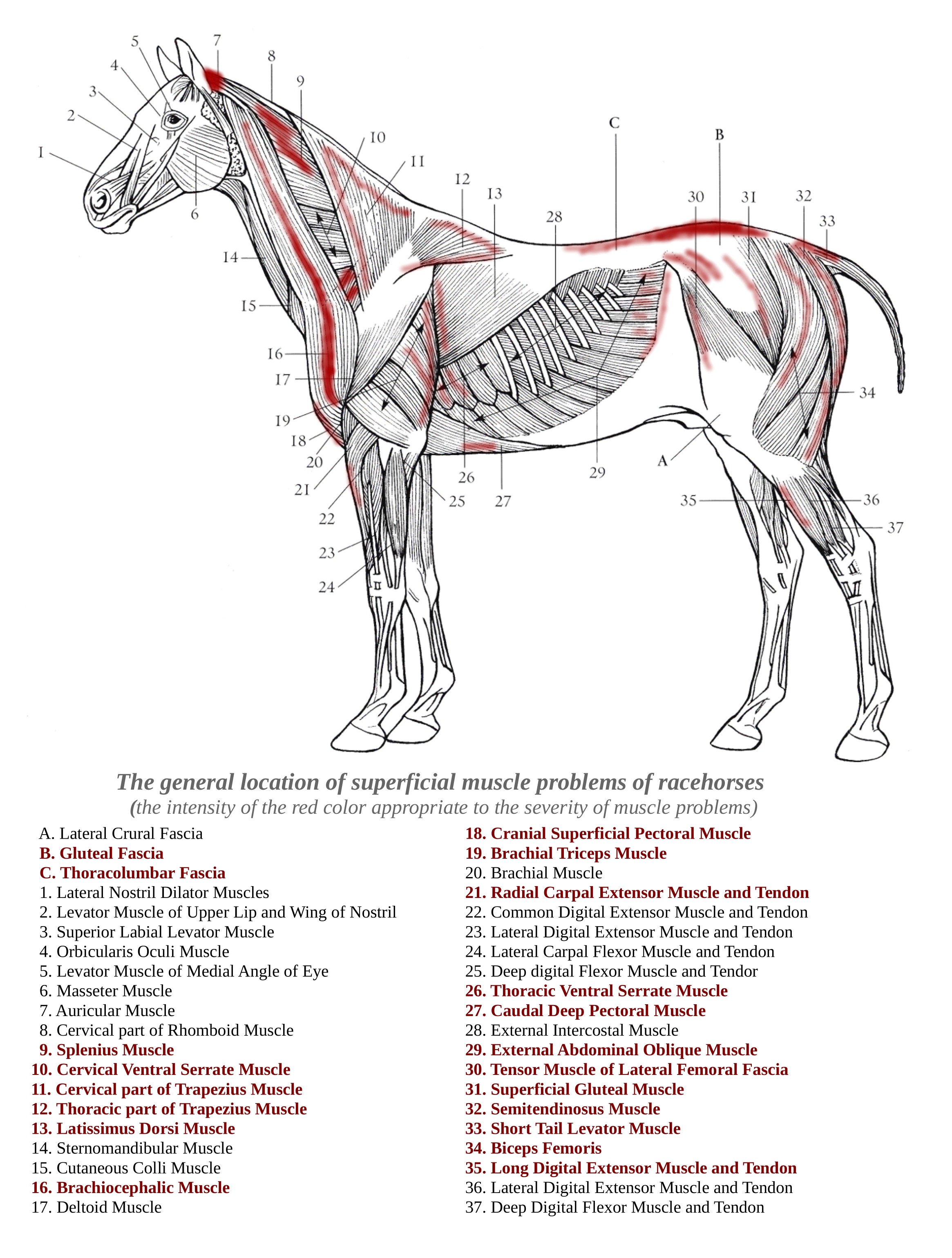 However, lameness and poor performance are often the result of the ultimate manifestation of pain due to a neurological or mechanical disorder in the horse. Is it possible to detect abnormal changes in skeletal muscle beforehand so that early veterinary intervention may be practicable? This brief study is intended to help understand the possible role of manual therapy in the early detection of pathological changes in the musculoskeletal system that may signal or cause a developing orthopaedic or neurological disease.

The present research project was designed to evaluate skeletal muscles form in the term of pain and muscle tension of thoroughbred horses trained to flat racing season. However, the following studies are intended more for educational purpose and to help raising awareness of musculoskeletal system condition during training program of racehorses, rather than proving the effect of training on the form of skeletal muscles, and that is how it should be interpreted. The work also did not use objectively pain measurement instruments, but only the subjective feeling and interpretation of behaviour of the horse by the therapist, who was the only one to make the assessment. Therefore, the studies are informative.

This project was undertaken in racing stable located in United Kingdom. 100 Thoroughbred horses ranging in age from 2 to 7 years old were assessed for signs of skeletal muscle pain and abnormality in form of tension. The horses in number 28 fillies, 62 geldings and 10 colts were kept in stalls in this same racing stable and were trained by this same trainer. Racehorses were examined manually from April to October. The muscle groups were evaluated by gently pressing them by the fingers of physiotherapist. The muscles were graded by scale from 5 to 0 according to severity of issues. Scale assessed the degree of muscle tension, and horses response to pressure. Assessment and preventive treatment of each horse were held once a week. Manual therapy was held two to three times a week and involved massage, acupressure, mobilization and manipulation therapy.

Evaluation of skeletal muscles graded by scale from 5 to 0 points. 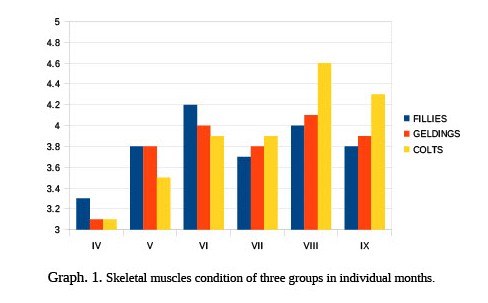 Graph shows the skeletal muscle form of three evaluated groups from April to September. The overall score of the muscles ranking was 3.8. The horses showed severe muscle soreness in the early stages of manual assessment and therapy. The condition of the horses increased from the start of the study to the middle of the training period, after which there was a decline in condition, which increased again until the end of the training period. It is worth noticing, that the horses were not treated between 27th of June and 19th of July, which may explain the decrease in musculoskeletal form. The fillies achieved the best form in June, while the geldings remained at an average, more stable level. The stallions showed a great improvement in form compared to the other groups and the best condition achieved in August and September.

It was noted that horses most frequently responded to pressing the muscles of the neck and lumbar area. Subluxation of the cervical vertebrae (78%) has caused tightness of muscles, in particular point on poll/ insertion of splenius muscle (46 %) and brachiocephalic muscle (34 %). Subluxation of the spine was observed along the entire length of more than half of examined horses. Lumbar and sacral area of the spine was the most affected. 75% horses showed sign of pain in lumbar part of Longissimus dorsi muscle. 4% of horses suffered from pelvic fractures during the season training. 1% of horses died during flat racing season because of muscle-related injuries. 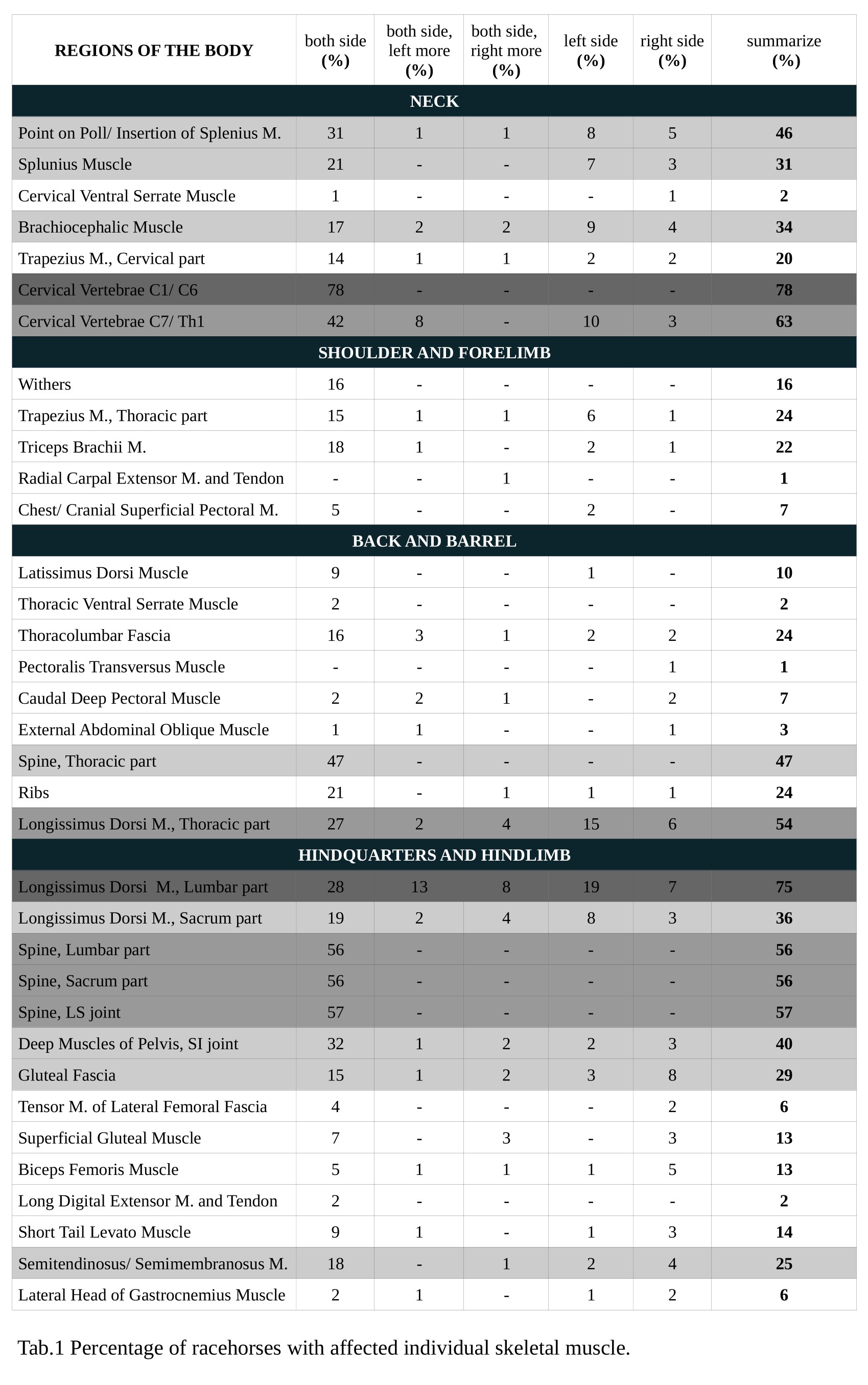 Overall, each of the horses evaluated in the research felt skeletal muscle pain during training and racing season. Untreated stiffness and slight muscle strains most often lead to diseases involving motion deficits, functional disorders, and lameness. Skeletal stiffness and muscle tightness are promoted by difficult, rigorous training and stable keeping. Trainer’s awareness of changes occurring in the horse's body during training is necessary to create well-being for horses. Regular assessment of the musculoskeletal form may allow for earlier detection of pathological changes, earlier diagnosis and earlier preventive and therapeutic measures. Regular assessment and earlier intervention can allow to avoid rest period, which is required for healing process. Because of that prevention and treatment of musculoskeletal disorders by physiotherapists should be one of the basic services in racing stables such as veterinarian and farrier care. More research on this topic is needed to minimise the injuries and diseases related to the training of the race horses.