Patella (kneecap) is a one of the bone components that form the stifle of the horse. It plays an important role in the biomechanic in thoroughbreds through assisting in highly movement by reciprocal apparatus, and stabilizing when use as a standing position by stay apparatus. Patella is attached to femur by quadriceps femoris muscle, biceps femoris muscle, tensor fascia latae, and to the tibia by medial, middle and lateral ligaments.

All interdependent elements stabilizing the kneecap enable the horse to lock and free the stifle out completely. More precisely, muscle, when contracted, with the limb weight bearing, they pull the patella and the medial patellar ligament inwards and upwards and ‘hook’ them over the medial trochlear ridge of the femur when the stifle is locked in extension. 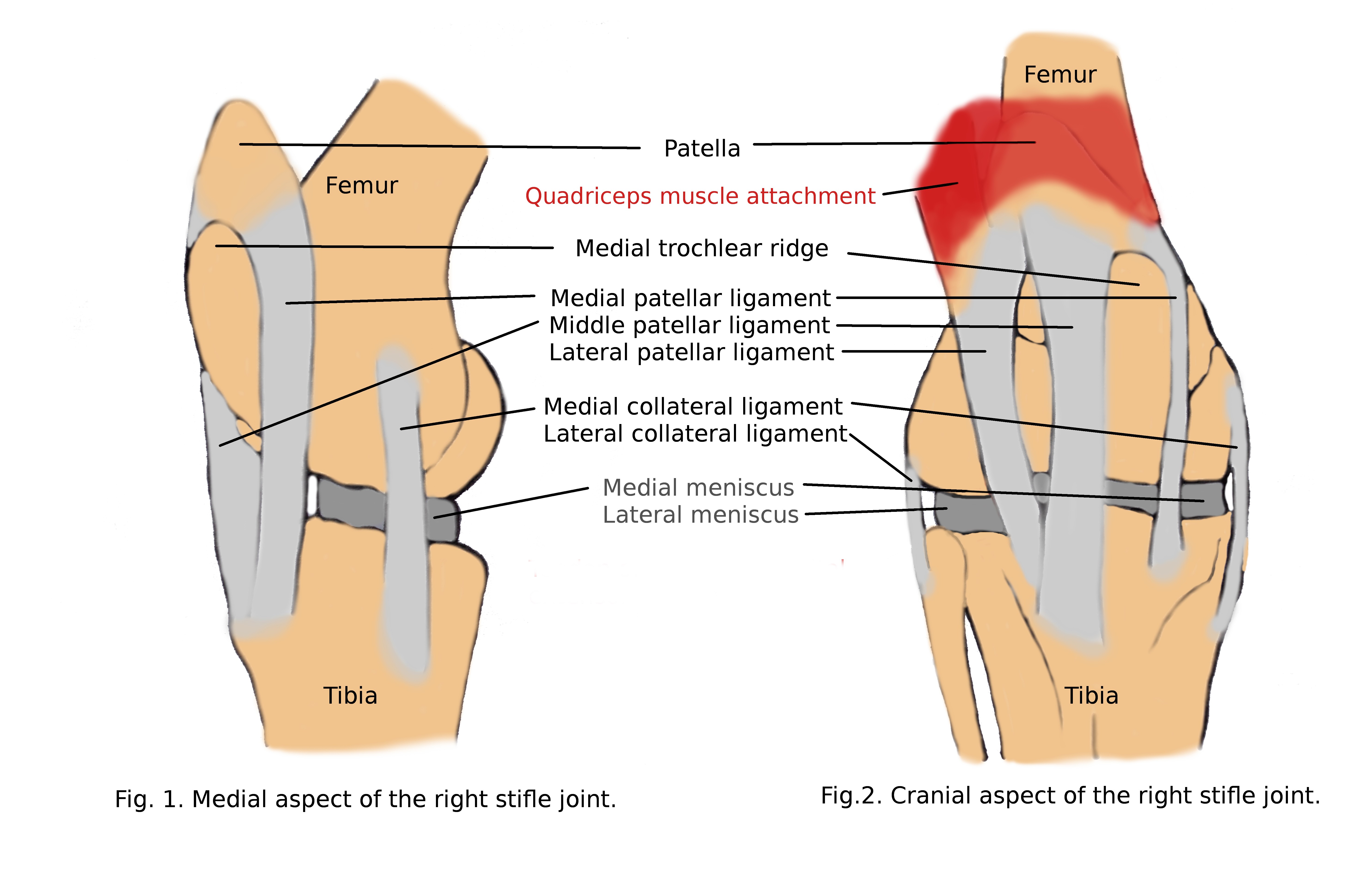 This mechanism prevents the stifle joint from flexing. To return the stifle to normal movement, the horse contracts the muscle components and lifts the patella off the trochlear ridge. The quadriceps, biceps femoris, and tensor fascia latae must all regain tone and coordination to recover the smooth gliding action of the patella. Loosening and weakening these tissue components can contribute to disturbances in the mechanics of the patellar movement. In such a situation, the medial patellar ligament remains engaged on the medial trochlear ridge during swing phase of the stride, horse can not flex the hind leg and the upward fixation occurs. The medial ligament stretches, making recurrence likely. If it is not resolved, it can create inflammation. The patella and the femoral trochlea rub together and can lead to onset of osteoarthritis and/or permanent ligament damage. Chronic instability can lead to degeneration of menisci, intermittent upward fixation of the patella can result in patellar ligament tearing (Hinchcliff et al., 2014).

Instability of patella commonly appears in both hind limbs, but one side is more affected than the other. Most often it concerns horses that have suddenly dropped off because of trening inactivity and have poor conformation of hind limb, or young horses that are growing rapidly. Growing rapidly thoroughbreds, or horses going through growth spurts which are causing them to be higher behind have wider the angle between the femur and the tibia bone what change the biomechanics in the stifle. Even small variations can affect the smooth functioning of the patella. Straight position of the stifle joint causes disturbances in the kneecap position during movement and its locking. The horse experiences discomfort that may manifests through bucking, kicking, refusal of the canter, go down hill and back up. Symptoms like short stride and drag hind toe can be also significant. To let the horse feel more comfortable, he is moves his weight forward, and as a consequence puts more strain on joints and muscles on the front. Also the basic propulsion work of the muscles is unevenly distributed and more carried by pelvic muscles, which gets sore and tight. The angle between the pelvis and the femur is reduced, and at the same increasing the angle of inclination in the stifle joint. Cascading pathological changes occur throughout the biomechanical system.

To avoid unstable patella is to keep healthy tone of the muscles, which create proper movement of patella. Regular checking of the correctness of the sliding kneecap by putting hand under patella when horse stands and ask him to flex by moving forward can catch up early abnormalities.

The best management is to catch the instability of the kneecap before it becomes persistent and leads to inflammation manifested by pain and lameness of the horse. Early detected patellar instability in thoroughbreds can be easily resolved by exercise programme aimed at strengthening the muscles, which are responsible for its stabilization. It is very important to understand the location of its the most important parts and function of the action during movement and standing when setting up exercise programme.

Rehabilitation programs focus on strengthening the three basic muscles that stabilize the patella, such as quadriceps and biceps femoris, and also tensor fasciae latae. However arranging an exercise program, it is also worth paying attention to the quality of the muscle mass of sartorius and gracilis, which also connects to the kneecap. Initial exercises like rocking by gently pushing tuber coxae or pulling a tail aside can be used to strengthen the muscles and coordination without putting strain on the stifle bone components (video below). It is a good solution for horses which are in box rest after injury or surgery. To these basic exercises should be added progressively exercises involving the alternating lifting of the hind limbs similar like for stretching method. Therapist has to be especially careful when performing these exercises as horses with muscle atrophy and weekness have impaired coordination. Next step for muscles building are exercises on the ground like walking and trotting in straight lines, over ground poles or cavaletti, and uphill. Lunging on the circles should be avoided during the first weeks of rehabilitation in order not to overload the unstable joint with excessive centrifugal forces. Finally, the dressage work under the rider, swimming, treadmill, stretched gallop ends the rehabilitation program and return to full training is possible.

Simple additions to patellar instability and fixation management such as cold hosing after exercise or when acute stage of inflammation is present, proper protein die, joint supplements and NSAIDS are often used to help progress the rehabilitation. It is very important to control the musculoskeletal system by a physiotherapist when adjusting the rehabilitation program to prevent and treat compensatory issues related to discomfort and pain caused by an unstable patella. A tense pelvic muscle can be treated with  ultrasound and manual body work.  It is also critical to address the long back and neck/shoulder muscles which may be painful and spastic. Equine physiotherapy prevents joint deterioration and provide relief for affected horse. Corrective shoeing to help limit the degree of stifle joint extension by raising heels of hind limbs, rolling the toes of the hoof or the shoes, and wedging pads sometimes it has to be added to the rehab plan. Veterinary intervention is used when horses do not respond to exercise and corrective shoeing. The available veterinary treatments include estrogen compound injection to help increase the tension of ligaments, vit B12 or counterirritant injection called internal blistering (an iodine, oil solution or steroid based product) to create an inflammatory reaction of three patellar ligament, and in result of thickening and shortening the ligaments making it less likely that the medial ligamnet will get stuck. More invasive splitting the upper third of the medial patellar ligament in multiple sites to shortening and thickening the ligament of the patella to prevent it from hooking over the femoral trochlea. As a last resort, it is used medial patellar desmotomy with risk possible implications that include permanent lameness from developmental joint disease and fracture of the patella. Medial patellar ligament desmotomy can lead to patellar ligament desmitis.